The Tea Party was created in 2009 as a result of mounting frustrations about big government, particularly the stimulus bill, financial bailouts and Obamacare. Its original stated principles and rapid rise to prominence revealed it to be representative of a strong Libertarian movement in America. However, as a significant portion of Tea Partiers reports an affiliation with the Republican Party through voting record or membership, the Tea Party also represents a schism among Republicans between liberty-oriented individuals that would be more attracted to Libertarianism upon awareness versus the social conservatives (the moral police) and so-called "moderates" (enablers of big government) that comprise the party majority.

While many "Tea Party candidates" were elected in the 2010 midterm elections, its long-term effectiveness remains to be seen.

The Tea Party is not an official political party, but is a decentralized grassroots movement incorporating a variety of beliefs across its national chapters. Recently, the Tea Party has absorbed more socially conservative elements into its organizations, diminishing the original message of liberty.

The Libertarian Party of Texas believes that, ultimately, the Republican Party will not deliver on its promises to reduce spending and the size of government. Texans who truly believe in the liberty message inherent in the Tea Party should instead support the Libertarian Party of Texas, the only political party to advocate for limited government, and effect a more significant change in our government and society. 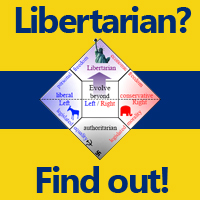